Jansi Rani, from Thalaiyampallam, is one of the Nandri Children we have supported throughoutmsecondary school. She was an excellent and ambitious student and was determined to break the cycle of poverty for her family by getting a good education and a well paid career.

Jansi’s mother is a widow and was struggling to feed and support her 5 children. Two of the children have serious medical problems, which put a further financial strain on the family. Nandri gave Jansi a loan so she could complete her 3rd level education and become a nurse.

It was a day of tremendous celebration for her family and the village when Jonsi graduated. She is presently working in a Delhi Hospital and is able to send money home to her mother and siblings. Nandri gave Jonsi a secure future and and as a result, a better life for all her family.

Thanks to the support of our kind donors, Nandri is able to change people’s lives for ever. 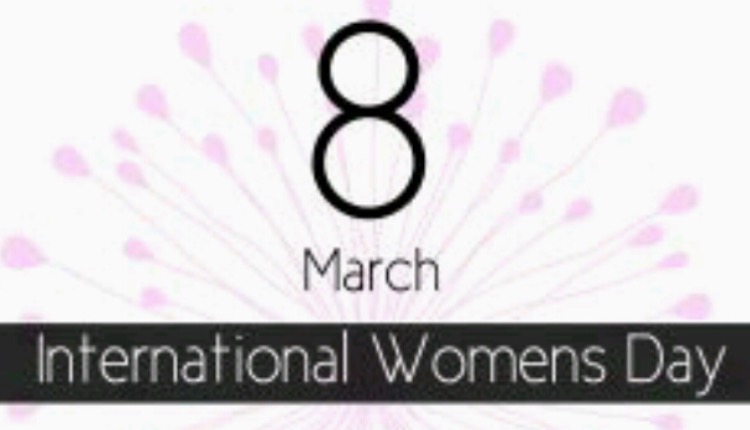 Nandri.org is very proud to join women all over the globe who come together today to celebrate International Women’s Day with a voice of unity.  Acknowledging this special day and the women who lead the charge when it comes to giving the not so fortunate voices of the world a chance to be heard to be one.

The Nandri ethos has always been simple, empowering women. How we achieve this is also simple, we support and encourage our members to be self sufficient. Through our self help groups, loan scheme’s, education and training programs.  Nandri has been providing, nurturing and supporting the women of rural, Southern India to strive for a better life for themselves and then in turn they support their families and the wider communities in Tamil Nadu.

Our Mothers Self-Help group is fundamental to our success. Nandri works with mothers groups at village level to administer loans. The income generated helps the mother keep children in education and provide for healthcare.

The earliest Women’s Day observance, called “National Woman’s Day,” was held on February 28, 1909 in New York.  It was organised by the Socialist Party of America at the suggestion of Theresa Malkiel who was an American labor activist, suffragist and educator. She was the first woman to rise from factory work to leadership in the Socialist party. Her 1910 novel, The Diary of a Shirtwaist Striker, is credited with helping to reform New York State labor laws.

In 2012 the UN theme for International Women’s Day was Empower Rural Women – End Hunger and Poverty.  In 2013 – time for action to end violence against women. In 2014 – Equality for women & it was declared that this would be progress for all!.

In 2016 The President of India, Shri Pranab Mukheriee, in his message issued on the eve of International Women’s Day said: “On the occasion of International Women’s Day, I extend warm greetings and good wishes to the women of India and thank them for their contributions over the years in the building of our nation.” The ministry of women and child development announced the setting up of four more one-stop crisis centre’s on March 8, in addition to the eight already functioning across the country. Ahead of Women’s Day, the national carrier Air India operated what it claimed to be the world’s longest non-stop flight where the entire flight operations were handled by women, as part of International Women’s Day celebrations. The flight, from Delhi to San Francisco, covered a distance of around 14,500 kilometres in around 17 hours.

This year the United Nations call for action is this “Achieving gender equality and empowering women and girls is the unfinished business of our time, and the greatest human rights challenge in our world.”

The Nandri message remains simple today and every day, give women the tools to empower themselves. Women of the world we salute you! 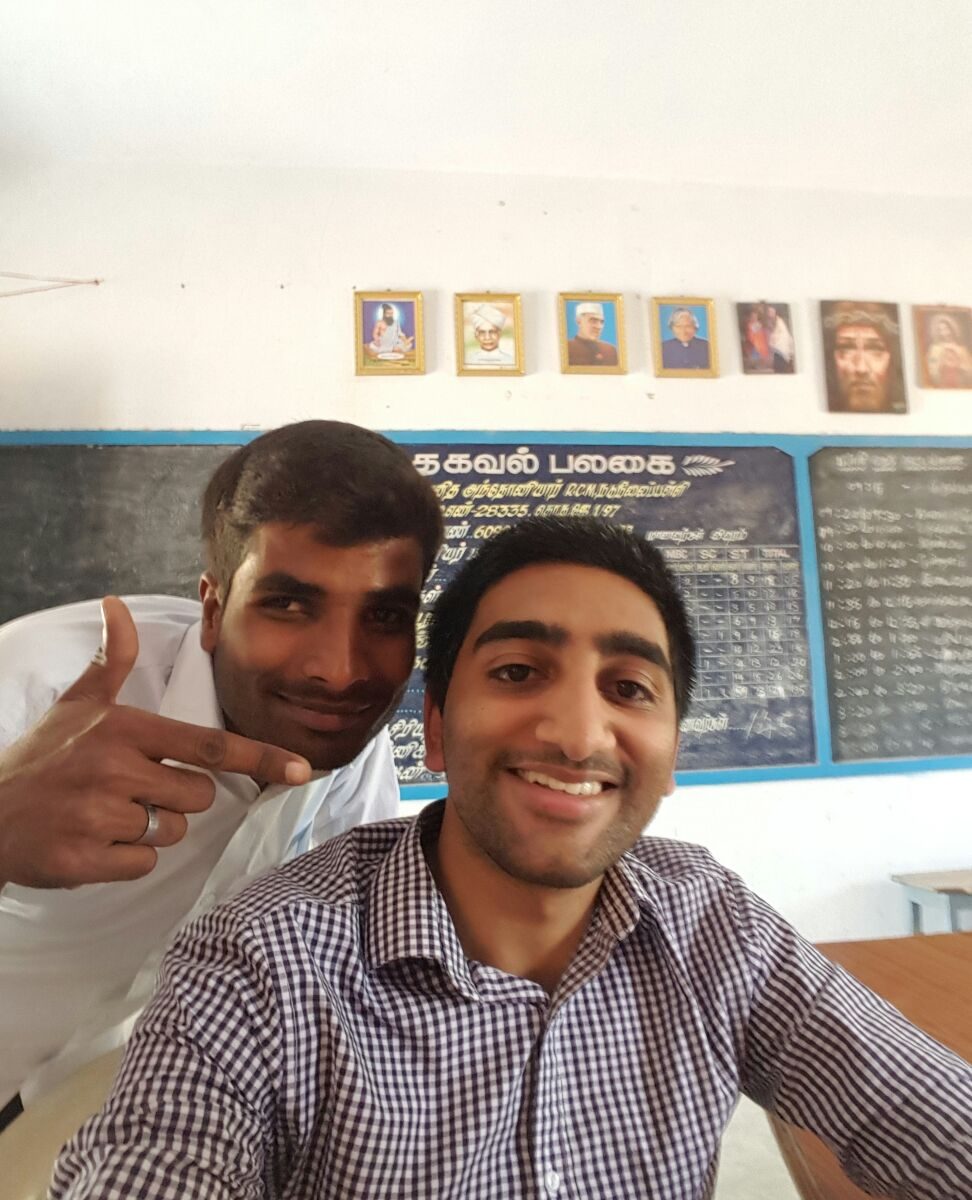 It was a typically hot and humid Monday morning wh 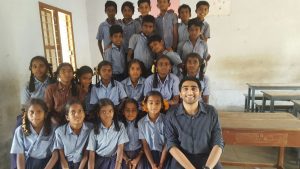 en I set off from the Nandri centre with Joe the Nandri India CEO.  Being honest I didn’t really know my destination, only that it would be quite rural and unlike anything I had experienced before. After driving past many towns and some bigger villages we started to head to a more mountainous area until we finally arrived in the village of Udaiyarkuppam. To my surprise and delight there stood a St. Anthony’s church with the parish house beside it where I would be staying for the next week or so. I would be living with the parish priest, Fr Arokiya Raj, who thankfully spoke English well and helped me to adjust.

The next morning, I was awoken by a what sounded like a large crowd. It was in fact a bell and then the public-address system from the church which calls out the time followed by a prayer or small bible reading at various times during the day. Unfortunately for me it started at 6AM! 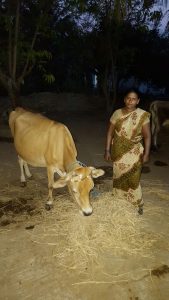 Across the yard from the church was the local school where Joe had suggested that I could help teach English while I was there. I hastily met the young principal, Karthik, and before I knew it I was officially a teacher at Anthony R.C.S Middle School. Suddenly in front of me I had 40 odd expectant kids, looking back curiously at this overawed foreigner. This was a Tamil medium school so the standard of English and exposure to it were rather poor.

Nevertheless, me and my students in 7th and 8th standard managed to communicate effectively with a mix of English, broken Tamil and extravagant hand movements! The enthusiasm and eagerness from the kids was fantastic as was the competitiveness which was on display when playing English learning games in class. 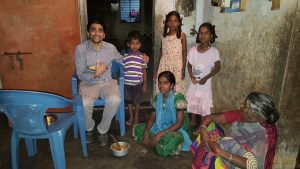 Break times were filled mostly with playing kabaddi, the local sport, where you try to tag the opposing team and run back to your team’s half before they catch and take you down. I had resisted many calls from the students to be a ‘raider’ but eventually gave in. It can get quite rough but thankfully they understood me saying “soft” before they gleefully took me down! 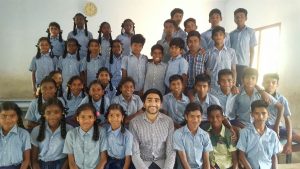 There are around 260 children, mainly Dalits, in the school and each day ends with everyone outside singing the national anthem before heading home which was quite different to Ireland. Admittedly it was daunting at first having never been in a comparable situation but I feel it was a worthwhile and beneficial experience for me and hopefully the students too!

My evenings were equally busy as I went around the nearby villages to conduct surveys as part of my work with Nandri. So, I was visiting mothers and their families who had received loans from Nandri 3 or 4 years ago and helping to determine the impact on their lives. This was another new experience from me as I was exposed to a different side of India than have seen on previous visits. I had help to complete this work in the form of Selvam, a college student in Chennai who is from the local area. His help to translate and converse with the mothers combined with his local knowledge were invaluable. Initially Selvam and I went on foot around Udaiyarkuppum and as I walked up to the homes of some of the mothers I could see the cow they owned- bought with the loan from Nandri. The cow provides them with an asset and essentially becomes an earning member of the family. The milk will usually be sold to a cooperative and so provides a regular monthly income source for the family and also future calves can be sold. Thus, I could see the direct benefit of the Nandri loan for some of the mothers as the extra income was used to help take care of living costs. Indeed some of it was put towards the educational fees for their children. It was also nice a surprise when knocking on a door and seeing it opened by one of my students, some of whom are supported by Nandri.

Of course, as I was travelling around the villages- sometimes with Selvam on his little motorbike- I met others who were struggling more. Some are constrained by chronic medical ailments or a lack of access and affordability to treatment and generally there is a shortage of work. This is in part due to Tamil Nadu being in the midst of its worst drought in 140 years. Naturally the shortage of water affects daily living but also employment opportunities as most people are agricultural daily labourers, thus relying on the land. The struggle is not helped currently by the governments inadequate support despite national protests from Tamil Nadu farmers. 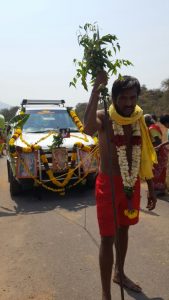 their homes. I’m grateful to their willingness to help us locate fellow group mothers on our list and inform us of any issues. I was also offered numerous snacks, fruits, tea and juice which was very welcome in the scorching heat. Indeed, I had the opportunity to have dinner in some of the mother’s houses and taste some local dishes which was nice- despite being far spicier than I’m used to! I was also able to attend a local Hindu festival one day which included inserting metal hooks into the backs of some worshippers and walking on fire followed by a procession. I had seen some similar things on t.v before but it was interesting to see it up close.

Overall it was an eye-opening experience to live in a truly rural area of India and see some of the people that Nandri support. I’ll certainly miss interacting with the imaginative kids from the school and the ability to talk with locals and learn about their lives while I definitely won’t miss the early morning ‘alarm clock’!  I’m told by locals that when the rains come the area is lush green and quite scenic and I look forward to returning sometime and seeing it for myself.